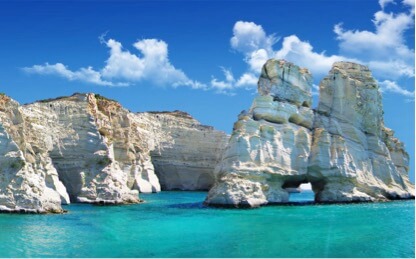 Unbelievable but real, the beaches of Milos are the most unusual beaches in all over the Aegean! Both their unique formation and their blue sea caves, as well as the rocks up to 10 meters high, remind us something of a science fiction movie.

Only in this island someone can find such a great diversity in the beaches, which will make you think that you are somewhere else. Sandy or pebble, deep or shallow, cosmopolitan or isolated, scenic or wild ... whatever you are looking for, the beaches of Milos can offer it to you!

Some of the beaches that are worth visiting on the island are: 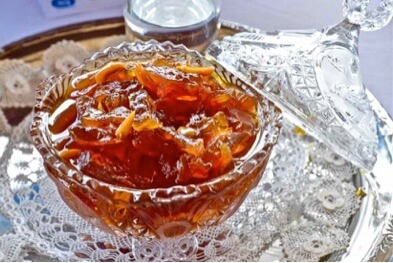 Milos, from ancient years, is an island inhabited by many cultures, including the Phoenicians, the Dorians, the Athenians, the Cretans, and the Romans. Everyone contributed and gave their touch to the gastronomy of Milos, making the traditional dishes even more delicious.

Dominant role in the gastronomy of Milos plays the tomato paste, which is the basis for many of the island's dishes, such as the goat in the pot. Moreover, it is one of the dips along with the bread.

In addition, Milos has a very famous livestock farming, due to the fact that the goats on the island exceed 12,000 in number. The most famous and most traditional product of the island is Miléiko cheese, which matures in the caves of the island, it is very tasty and reminds of parmesan cheese. This cheese is the main ingredient of many famous pies of Milos, such as cheese pies with onion and herbs.

Finally, from the gourmet feast of the island, a dessert could not be missed, which is no other than the traditional sweet called "Koufeto" of Milos. The name of the dessert testifies its taste, as it is made from pumpkin, honey and almonds; ingredients that reminds us a real ‘’Koufeto’’. This is the reason why it is considered the sweet of the weddings and it is offered to the recently married couples in order to have a sweet life.

The Christian Catacombs of Milos, due to which it is proclaimed Sacred Island, are the oldest and most important monument of Christianity in Greece, as well as the most well-known and remarkable Christian monuments worldwide, along with the catacombs of Rome and the Holy Land.
They are located in Tripiti and constitute an admirable labyrinthine cave system of about 180 meters. It was the place of concentration of the first Christians and the first communal cemetery at the end of the 2nd century A.C. century.

Since then, more than 140 churches and chapels have been built on scattered points of the island, giving visitors the opportunity to experience the historic Sacred side of this charming island.

Some of the churches that are worth visiting:

In the history of Milos, as recorded, at least four different cultures have been inhabited in the island; including the Phoenicians, the Dorians, the Athenians and the Romans.

During the stay of these people at Milos Island, statues and other monuments were created, which were distributed and preserved in five different museums.

It is worth mentioning that one of the most famous statues of the world is Venus of Milos, which was purchased by France for a very small amount of money in the period of 1821. Now it stands in a prominent position at the entrance of the Louvre Museum.

The five historic museums of Milos, which you should visit are: